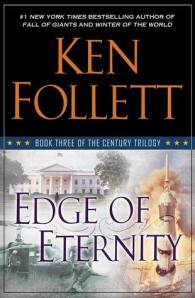 Sometimes a book touches you so deep that you have to tell everybody about it. The book stays with you, lingers in the back of your mind. The characters become real, you are happy with them, you cry with them and you feel lost when you eventually have to say goodbye to them

Such a book is Edge of Eternity by Ken Follett

Edge of Eternity is the final book in the Century Trilogy, but you can read it on its own as well.

The first book in the trilogy, is Fall of Giants and book 2 is Winter of the World. 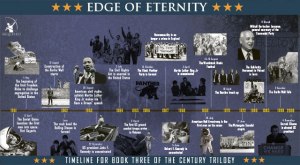 All through the Century Trilogy we follow the lives and fortunes of five families – American, German, Russian, English and Welsh – and how they connect and interact with each other. Edge of Eternity is about the era all of us most probably remembers the best and some of us have experienced first-hand.

It starts in the 1960’s and runs through the 1980’s, through all the social, political and economic ups and downs of those times – from civil rights, assassinations, mass political movements and Vietnam to the Berlin Wall, the Cuban Missile Crisis, Presidential impeachment, revolution; and rock and roll.

It heartrendingly tells us about the Berlin Wall that basically arose overnight and how it affected people on both sides. You read about the Kennedy’s, the good and the bad; about racism that was so bad in the Southern parts of America that it makes you weep; about how close we came to a nuclear World War 3; about good communists and the worst. It tells us about a world we thought we knew, but now will never see the same again.

You will read about the early conflict of the Freedom Riders, who began the fight for civil rights for African-Americans. There are the shocking deaths of J.F. Kennedy and Martin Luther King, as well as the legacy they left with regard to the Berlin crisis, the attempts at segregating public facilities and educational institutions, the conflict in Vietnam, and more. The evolution of communism in Russia, Germany and Poland is also clearly documented, as well as the time when a bright young reformer named Gorbachev came along and the Wall was broken down. You celebrate with the people in the streets on the night the border posts between East- and West-Berlin are thrown open and families are reunited after decades.

But none of this book is boring history alone – it is about living, breathing people – people who lived and engaged in all these events over the years, with romance, terror, frustration, determination, fury and celebration.

The 2008 epilogue depicts Barack Obama’s election-night victory speech and a child asks: “Why is grandfather crying?” The answer: “It’s a long story.”

Yes, it is a long story indeed. A story about how people never give up fighting for personal freedom, all over the world. And how no government can keep that from its citizens forever.

Somewhere, somehow, people will take their freedom back, even if it costs everything they have.

4 thoughts on “Edge of Eternity”

Translate this blog from Afrikaans to your language 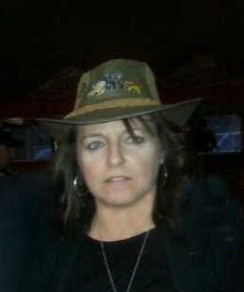